This tutorial presents a example of usage of Grid'5000 which benefits from the capability of reconfiguration of the network topology of the platform, using KaVLAN.

KaVLAN is a Grid'5000 tool, which allows a user to manage VLANs in the platform. That mechanism can provide a layer 2 network isolation for experiments.

This tutorial will only use 3 nodes, but could be adapted for a usage at scale, with hundreds of nodes.

Three kinds of KaVLAN VLANs are available in Grid'5000. You can find more information in the KaVLAN page. In this tutorial, we will only use global and local VLANs (but no routed VLAN).

Before going further with the practical setup proposed in this page, it is strongly advised to read the KaVLAN page.

In this first part of the tutorial, we setup a topology, as presented in the following picture. 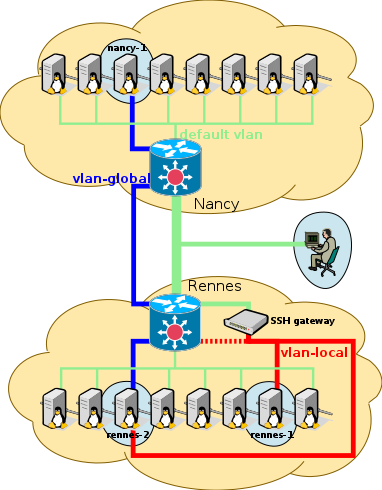 Reservations of the resources

First of all we will create jobs to reserve:

In the text below, we use the sites of Rennes and Nancy (but other sites could be used, see below):

(we will discuss later about the global VLAN).

Consequently, practically speaking, you are advised to open 2 terminal windows (2 separate shells) for the tutorial, one for Rennes and one for Nancy.

In Rennes, we have to reserve 1 local VLAN, and 2 nodes for instance of the paravance cluster, because that cluster is composed of nodes with 2 network interfaces (in order to find other Grid'5000 clusters providing such a characteristic, you can go to the Hardware page).

We also try to reserve the global VLAN in Rennes as well.

Since we have to work on 2 different sites, we will use OAR advance reservations in order to have 2 jobs that start and end at the same dates. Let's define STARTDATE as the start date (e.g. "2016-01-21 14:00:00", don't worry if it is in the past for a few minutes), and WALLTIME as the duration of the job (e.g. the duration for the tutorial).

Once logged to Rennes' frontend in our first terminal, we execute:

In either case, one will have to try to use another site than Rennes, or try again later.

If you face issue #1

Just replace Rennes by another site which has nodes with several interfaces (see the Hardware page to find such a site).

If you face issue #2

So, if the previous command fails because Rennes' global VLAN is not available, only execute:

(and do not forget to reserve a global VLAN in the other site, as you will be proposed in the next section about the reservation in Nancy).

Either way, a successful oarsub command should have returned a JOBID.

Now, let's retrieve the ID of our VLANs (local + global, or just the local one if the global VLAN is reserved elsewhere):

You can know which VLAN ID is global and which is local, using the following table:

If we managed to reserve the global VLAN in Rennes, we just need to reserve a single node in Nancy. In our second terminal, we log to Nancy's frontend, and execute:

If not, we also reserve Nancy's global VLAN. We execute:

Again, a successful oarsub command should have returned a JOBID (which of course may not be the same as the job ID in Rennes).

If the oarsub fails (returns "KO"), that means that you probably should try to use yet another site than Nancy, where the global VLAN would be available.

You can now look at which VLANs you get, as above.

Deployment of our operating system for the experiment

Back on the Rennes terminal, we now enter our job in order to benefit from OAR environment variable $OAR_NODEFILE.

(JOBID is the one of the job of Rennes of course)

Then we launch the deployment of the Debian minimal environment to the nodes:

In order to be capable of doing ssh from one node to the other, we push our SSH private key to the nodes.

We run from Nancy's frontend the same commands as in Rennes, but use the JOBID of Nancy of course.

In this tutorial we are going to need some extra packages which are not installed in debian11-min environment, such as tcpdump. Since we are going to modify the network configurations making the Internet unreachable from the nodes, we must install them beforehand.

Besides, you may wish to play with (or debug) your network configuration with other tools like ethtool, dig, or traceroute as well. If you want to use them later you need to install them now too.

In Rennes, since we reserved several nodes (hey, 2 is more than 1! :-) ), we will be using TakTuk for speeding up the process:

In addition, we will need OpenVSwitch on rennes-2 in the second part of the tutorial, so we install it too:

Setup of the network topology configuration

Thanks to KaVLAN, we will have a layer 2 network isolation for our nodes. That means that whatever IP configuration we set in our VLAN, there will be no risk to break the network configuration in the default VLAN or to disturb other users (for instance by misusing reserved IP addresses). We can even setup network services or protocols based on IP broadcast for instance (e.g. DHCP) with no risk of polluting the default VLAN (or conflicting with the platform's default VLAN DHCP service).

However, we must keep in mind that:

That said, for this tutorial and up until the openvswitch section, we will use the predefined IP addresses provided by Grid'5000. This will be very handy thanks to the DHCP services which are provided in the VLANs.

Furthermore, for the ease of reading this document, let be:

The mechanism we have to trigger is the following:

Since our node won't be reachable with its old IP address (the one for the default VLAN) once put in the global VLAN, we won't be able to run action #2 after running action #1 as-is. We will use a trick to create a trigger before action #1, in order to run action #2 asynchronously. That can be done using the at command, for instance. Let's do that in one command line:

In this way, the restart of the networking service will be scheduled before changing the VLAN, and actually done one minute after.

Another option would be to use Kaconsole, to access the node via its serial console to run action #2, but that is definitely not scalable to many nodes, so it is to be kept as a last resort option.

In Rennes, we want:

That way, rennes-2 will be in-between the local and the global VLANs, which is the heart of our setup.

For the first action, we do the same as for Nancy's node, but with the local VLAN instead of the global VLAN, and using taktuk to benefit from a parallel execution on the 2 nodes:

Notice that rennes-1 and rennes-2 are still accessible via SSH on the VLAN's gateway, named "kavlan-L_ID":

We now have to put rennes-2's secondary network interface in the global VLAN. That secondary interface can be referenced with the following hostname: rennes-2-eth1.

So, to do that, run the kavlan command:

Since the node is not reachable anymore from the default VLAN, we will have to go through the local VLAN to restart the network service. So let's bounce on the gateway to reach rennes-2, like this:

And finally, configure the interface and program a network restart in one minute:

Then exit the terminal before the networking service restarts, otherwise the SSH session will be lost and the terminal will freeze.

We are now done with the VLAN setup.

The following table summarizes the hostnames of the machines and the way to access them, depending on the VLAN they are in:

First tests of the topology

We can now run some basic tests:

For that purpose, you will have to find out the hostnames and IP addresses of the machines in the VLANs ! See KaVLAN and the table above.

For instance, rennes-2 should be reachable with the hostname rennes-2-eth1-kavlan-G_ID.

The last 3 pings between nancy-1 and Rennes' local VLAN (either way) should fail at this point.

Setup of the IP routing between the 2 VLANs 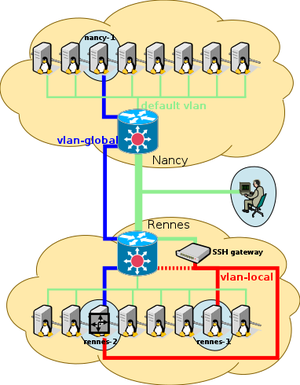 Topology with a software router

rennes-1 and nancy-1 are in separate VLANs, so no IP networking is possible directly from rennes-1 to nancy-1 (or the way around).

To enable that, we will activate the IP routing feature of Linux on rennes-2. This in fact only consist in activating a sysctl, as follows:

But we also need to add a route on both rennes-1 and nancy-1, to make them know how to contact each other.

To find out the IP network of the local VLAN and of the global VLAN, we can either look at the tables in the KaVLAN page, or examine the IP configuration of the interfaces of rennes-1, with ip addr show and ip route show.

We can add on rennes-1 a route to the global VLAN as follows:

And on nancy-1 a route to the local VLAN as follows:

Routing should now be operational!

First, you can replay the previous tests and check that they all succeed now:

And to go further, we can observe packets with tcpdump. For instance let's glance at the packets on our router.

We run on rennes-1 and rennes-2 the following commands:

On the first terminal you should see that the ICMP requests and replies are forwarded on rennes-2 :

If ip forwarding was disabled on rennes-2 (see above the sysctl command to disable it with a '0' instead of a '1'), tcpdump will only see ping requests (not ping replies because rennes-2 doesn't transmit anything to nancy-1), and ping should fail.

We also check the packet route with traceroute from rennes-1:

We should see two hops: the intermediary router and the target:

The first hop is rennes-2, and the second one is nancy-1.

With tcpdump we can check the complete isolation of nodes from the production VLAN (and from any other one) :

The only frames received are ethernet-level management frames sent by the switches (STP frames here, but we could also see LLDP frames, or other ones)

In comparison, this is what can be captured on a node in the production VLAN, in only a one second time: 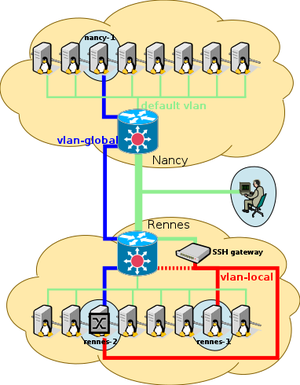 Topology with a software switch

Our goal is now to allow nancy-1 and rennes-1 to communicate directly at the Ethernet layer, with no IP routing in between. In this configuration, only one IP subnet (range) must be used, so let's chose the global VLAN one, and forget about the local VLAN one.

First, we need to unset what we configured when we were doing IP routing:

Just replace add by del in the ip route command.

in the sysctl command, set ip_forward to 0 instead of 1

Unconfigure the IP addresses of the network interfaces:

Add eno1 and eno2 to the bridge:

You can list all the ports in the bridge with:

rennes-1 should now have an IP of the global VLAN, while still in the local VLAN, with the associated DNS hostname: rennes-1-kavlan-G_ID !

Now that everything is configured:

You can use openVSwitch to manage flows, for example you can DROP all pings to a specific IP from a specific interface:

As it can be checked with the "ovs-ofctl show" command, "in_port=1" refers to eno1 in our case. Now, from rennes-1, try to ping nancy-1 and check that it doesn't work, but make sure you can still access it via SSH.

You can also DROP all packets from an IP with this command:

Additionally, the following command will display all your flow rules :

The development of a new tool was recently started to automate most of the previous reconfiguration steps.

If you finished the tutorial, please have a look at the TopoMaker page, and beta test !

At this stage, you are now ready to perform SDN (Software Defined Networking) and NFV (Network Function Virtualization) research on Grid'5000. You could:

Also note that Nancy has nodes with four 10Gbps network interfaces (grisou), which might be useful for more complex setups.