The Grid'5000 network is built with high-performance network hardware and dedicated network links. This way, the infrastructure can support demanding experiments that make heavy use of network resources.

Grid'5000 offers a variety of resources in several geographic areas, which may be enough in some cases to build an experiment with the desired level of performance. If more control on network parameters is required, then network emulation can be used instead. Emulation allows to artificially degrade network performance to a desired level, while still using real hardware and a real network (unlike simulation).

The main network parameters that can be emulated are bandwidth, latency, and packet loss. Of course, these parameters can only be made worse than what the real network provides: if the base latency between two nodes is 5 milliseconds, emulation will not be able to provide a lower latency than this.

Network emulation can be difficult to get right, so if there is a simpler way to obtain the required network parameters, it should be used first.

We describe two possible methods: how to obtain a specific link speed on a node, and how to obtain higher latency using multiple geographical sites.

Nodes in Grid'5000 have network interfaces with different speed. For Ethernet, this is typically 1 Gbit/s, 10 Gbit/s, or 25 Gbit/s. See Hardware#Networking for a complete and up-to-date list.

Select a node with the desired interface speed, and if necessary follow the multi-NICs tutorial if the interface is not the first one.

For instance, grisou nodes in Nancy have a secondary 1 Gbit/s interface called eno3. To set it up to 100 Mbit/s:

You then have to make sure you are using this specific interface for your experiment: it means using KaVLAN if you want to isolate it, and configure appropriate routing. 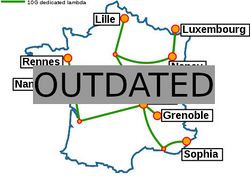 As such, you can use nodes on two sites that are far apart, and this will result in natural network latency between groups of nodes. For instance, the latency between the sites of Nancy and Rennes is around 25 milliseconds.

There are several options to reserve nodes on different sites:

By default, nodes in different sites are not in the same Ethernet network: traffic goes through backbone routers. If you need direct layer-2 connectivity between your nodes, you can use a global VLAN that is propagated to all Grid'5000 sites. 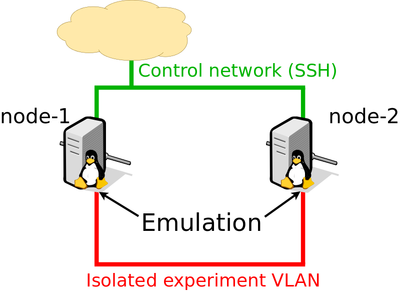 For this basic use-case, the idea is to apply emulation with netem directly on each node. An example setup with two nodes is depicted in the figure.

The advantage of using two networks is to clearly separate the control from the experiment: all control traffic such as SSH, DNS or NFS will not be affected by the emulated network conditions.

This setup can be used with more nodes, and even with nodes from different sites.

First, if you have specific hardware requirements, identify the clusters you would like to use thanks to the Hardware page. Make sure that nodes have several Ethernet interfaces.

Reserve nodes from a specific cluster:

As an alternative, reserve nodes from any cluster that provides enough Ethernet interfaces:

The last step is to deploy an environment on your nodes:

The first step is to determine the name of the secondary interface name on your nodes. Use the Hardware page, the API, or run ip link show on a node. You need both the actual interface name on the nodes (often enoX or enpXsY) and the API name (ethX). The following assumes that the interface is named eno2 on the nodes and eth1 in the API.

You will also need the VLAN ID for the secondary network, which will be denoted as KAVLANID in the following:

Move the secondary interface of your nodes to the dedicated VLAN:

On each node, run a DHCP client on the secondary interface to obtain an IPv4 address:

Check that connectivity works in the VLAN:

To add 10 milliseconds of delay in each direction, setup netem on each node:

Remember that netem applies emulated latency for outgoing traffic only, so we need to apply it on both nodes.

Test to ping again between nodes:

The result should be around 20 ms (ping measures a round-trip time, so it accounts for emulated delay in both directions).

To test emulated bandwidth, start by installing iperf3 on all nodes:

Measure the baseline TCP throughput, with no bandwidth limitation (only the previously configured 2x10 ms delay emulation, which should not affect throughput too much):

You should obtain around 1.2 Gbit/s depending on the CPU of your nodes (on 10 Gbit/s networks, iperf3 is limited by the CPU and will not be able to saturate the network)

Setup an emulated bandwidth limit at 50 Mbit/s on node1:

You should now obtain a bit less than 50 Mbit/s with iperf3.

Setup netem to emulate 1% packet loss from node1 to node2, as well as 10 ms of delay:

Try again to run iperf3 from node1 to node2: you should now obtain around 10 Mbit/s (it's quite variable because of the random nature of the emulated packet loss).

Network emulation on a Linux router

In some cases, it may not be practical to apply emulation on all nodes of your experiment. A more advanced alternative is to introduce a node acting as a Linux router between two groups of nodes: this way, emulation only needs to be done on the router node itself.

Setting up the topology

Emulation needs to be done on the router node. See #Basic network emulation with netem.

Several software tools can be used to automate your networking experiments on Grid'5000. Most of them include support for network emulation.

Distem is a tool that can emulate a distributed system on a homogeneous cluster. As such, providing emulated network links is one of the core features of Distem.

To learn how to use Distem for this use-case, follow the Getting started with Distem tutorial.

EnOSlib is a Python library that helps you setting up an infrastructure to perform experiments. It supports Grid'5000 as one of the possible infrastructure providers.

Distrinet has similar goals as Distem: it allows to distribute a Mininet topology on several physical hosts.