Difference between revisions of "Grid5000:Home"

Five random publications that benefited from Grid'5000 (at least 2143 overall): 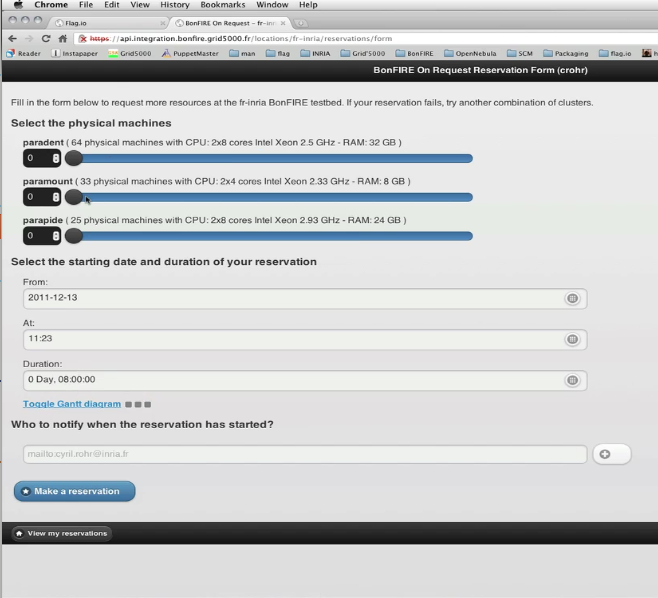 Using Grid'5000 for on-demand extension of an OpenNebula installation

A few speakers with experience gained using Grid'5000 will be taking part in the Support for Experimental Computer Science Workshop at SC11. This should be of interest to all Grid'5000 users. Abstract reads : The ability to conduct consistent, controlled and repeatable large-scale experiments in all areas of computer science related to parallel, large-scale or distributed computing and networking is critical to the future and development of Computer Science. Yet conducting such experiments is still too often a challenge for researchers, students and practitioners due to unavailability of dedicated resources, inability to create controlled experimental conditions, and variability in software. Availability, repeatability, and open sharing of electronic products are all still a challenge. This workshop will bring together scientists involved in building and operating two infrastructures dedicated to supporting Computer Science experiments, Grid 5000 in France and Future Grid in the United States, to discuss challenges and solutions in this space. Our objectives are to share experiences and knowledge related to supporting large-scale experiments conducted on experimental infrastructures, solicit requirements, and discuss methodologies and opportunities created by emerging technologies.

The program of the workshop is available here.

During the Rencontres Scientifiques France Grilles, Sébastien Badia and Lucas Nussbaum received the best poster award for their work on the deployment of the gLite grid middleware on Grid'5000. This work was done in the context of the Appel Interfaces Recherche en grilles/Grilles de production 2009, co-funded by Institut des Grilles (CNRS) and ADT Aladdin (INRIA).

A cluster with GPUs has been deployed in Lille since April 5th, 2011. A tutorial day in the context of Grid'5000 is therefore organized Tuesday June 28th, at INRIA Lille, to present Grid'5000 and to learn to use these new resources. Please refer to the details I you wish to participate.

SC-Camp is an initiative of researchers to offer to undergraduate and master students state-of-the-art lectures and programming practical sessions upon High Performance and Distributed Computing topics. In 2010 the event was in Bucaramanga, Colombia. In 2011 the event will be hosted by Universidad de Costa Rica, Sede del Atlántico en Turrialba. SC-Camp is a non-profit event, composed by 7 days starting on July the 10th of 2011. Of those days 6 are dedicated to scientific lectures, practical programming sessions and a parallel programming contest.

If you are of those who enjoy a recap of the different commands and links to the main help pages, you'll be pleased to see that an admin has contributed the first Grid'5000 cheat sheet to this wiki. If you wish to understand how it was built, you can read and suggest contributions in the corresponding bug.

Grid'5000 allows experiments in all these software layers

The current plans are to extend from the 9 initial sites each with 100 to a thousand PCs, connected by the RENATER Education and Research Network to a bigger platform including a few sites outside France not necessarily connected through a dedicated network connection. Sites in Brazil and Luxembourg should join shortly, and Reims has now joined.

All sites in France are connected to RENATER with a 10Gb/s link, except Reims, for the time linked through a 1Gb/s

This high collaborative research effort is funded by INRIA, CNRS, the Universities of all sites and some regional councils.

ALADDIN-G5K : ensuring the development of Grid'5000

For the 2008-2012 period, Engineers ensuring the development and day to day support of the infrastructure are mostly provided by INRIA, under the ADT ALADDIN-G5K initiative.

Héméra is an INRIA Large Wingspan project, started in 2010, that aims at demonstrating ambitious up-scaling techniques for large scale distributed computing by carrying out several dimensioning experiments on the Grid’5000 infrastructure, at animating the scientific community around Grid’5000 and at enlarging the Grid’5000 community by helping newcomers to make use of Grid’5000.

The foundations of Grid'5000 have emerged from a thorough analysis and numerous discussions about methodologies used for scientific research in the Grid domain. A report presents the rationale for Grid'5000.

In addition to theory, simulators and emulators, there is a strong need for large scale testbeds where real life experimental conditions hold. The size of Grid'5000, in terms of number of sites and number of processors per site, was established according to the scale of the experiments and the number of researchers involved in the project.